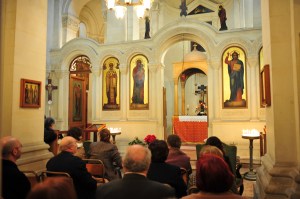 The Three Divine Liturgies
In the Byzantine tradition, the Eucharist is celebrated according to three hallowed formularies, attributed traditionally to Saint John Chrysostom, Saint Basil the Great and Saint James of Jerusalem.

1. The Liturgy of Saint John Chrysostom
Saint John Chrysostom was from Antioch and he was renowned for his eloquent preaching, for which he earned the name Chrysostomos or ‘golden-mouthed’. He was appointed archbishop of Constantinople in 398, but was later exiled by Empress Eudoxia because he tried to reform the morals of the royal court and of his city. He died in exile in the year 407 AD, uttering the words Doxa tō Theō pantōn eneken, that is ‘Glory to God for all things’. Of the three liturgies outlined above, his is the one which is most often celebrated during the liturgical year. This Liturgy is not celebrated on Good Friday and some ten specific occasions, including the Sundays of Lent when it is replaced by the Liturgy of Saint Basil the Great.

3. The Liturgy of the Presanctified Gifts:
Tradition ascribes this very ancient Liturgy to Saint Gregory the Great. It is so called because the Holy Gifts are previously sanctified during the Liturgy of Saint Chrysostom or Saint Basil. This Liturgy, which is celebrated in combination with Vespers, enables the faithful to partake of the Presanctified Holy Gifts during the days of Great Lent, except on Saturdays, Sundays and on the feast of the Annunciation, when the full consecratory Liturgy is celebrated.

The Divine Liturgy: the main parts.

2. The Liturgy of the catechumens:
a. the singing of psalms
b. diaconal litanies
c. the little entrance with the Gospel
d. readings from Acts, Apostolic letters, and from the Gospels
e. the sermon
f. the prayers for the catechumens

3. The Liturgy of the faithful: This third section is the most important part of the Divine Liturgy because it includes the Eucharistic sacrifice. It consists of the following rites:

a. the prayers of the faithful
b. the great entrance with the oblations (the Holy Gifts)
c. a call for mutual love and the Creed
d. the Eucharistic Prayer (Anaphora)
e. the Lord’s prayer
f. the elevation and fraction
g. the communion and thanksgiving
h. the dismissal